During July my younger step-daughter was married. I was thrilled when she and the bridegroom asked me to bake a range of breads that would be the feature of the first course at the sit-down dinner for 200 people. The bread was to be accompanied by an interesting range of salsas, dips and charcuterie.

They were surprised when I said that as well as grand sourdough wheaten loaves I would make wedding rolls with refined white flour. As far as I know, they are Jewish and would have been popular in London’s East End, and in Manchester, the two main areas in the UK where there were concentrations of Jewish bakeries. 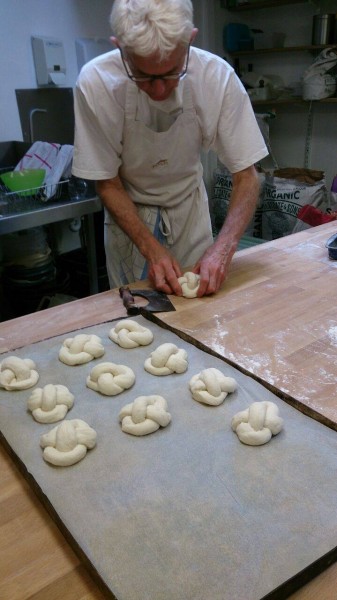 First, make two rods of dough.  Make them as long as your hand span, even a little longer, for ease of making the roll’s knot flat on the bench (the symbolic tying the knot!).  If they are too short you will be uncomfortable and the knot will not flow properly. The ones I made were large, each one weighed 150 gm, and 15 to 18 would fit the large baker’s trays. Hence I took the weighed piece of 150 gm., and divided it into two before rolling out the two sausages.

Starting position.Lay one over the other, the top piece humped up where it crosses the bottom one at right angles.

First move.One end of the bottom piece is brought up and over beside the hump to lie beside its other end.

Second move. Pick up that other end and lay it over its own end that you had first moved. 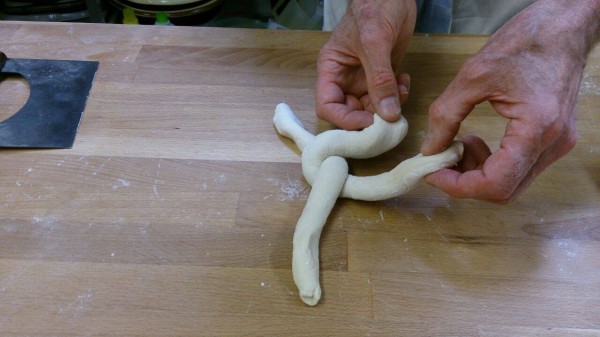 Third move. Now you complete the knot by picking up the end of the original top piece nearest you and drawing it up and over the others, keeping it on your side of the double hump. It will form a strong curvaceous boundary to that side. 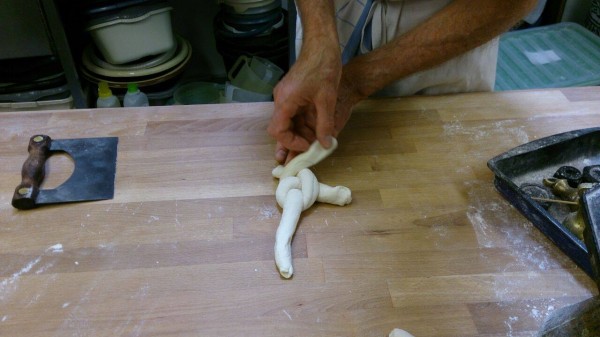 To finish. The loose and untidy ends must be wrapped around and secured under the bottom to give stability and balance to the whole structure.

Sorry, but BUY OUR BREAD is closed. Our next bake is on Thursday 14th July 2022. Please, pop-back anytime from Friday 8th place your next order. Thank you. Paul. Dismiss