In our series on Table Skills, moulding for a tin is a continuation of the discipline of rolling dough into a tight cylinder. Achieving the tight cylinder is the final action.

Begin by turning the piece out onto the table with its rough side facing up. Proceed to pat out any gas as well as stretch the piece sideways, as shown in the first two pics. 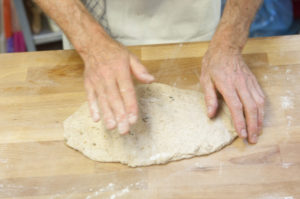 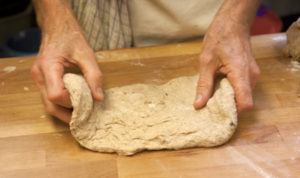 Now you do what, with students, I call a “flip-flop”: turn one end inwards, the other folded over it, so that each movement denotes one-third of the width, as these two pics show. 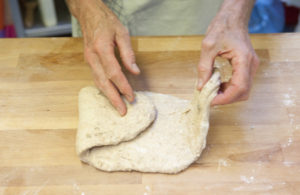 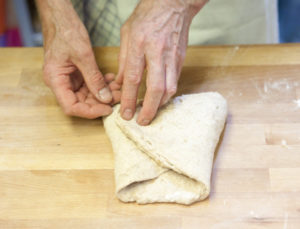 Before the tight rolling of the cylinder, a preparatory step is to turn it over at the top towards you to have it ready for the rolling. See pic: 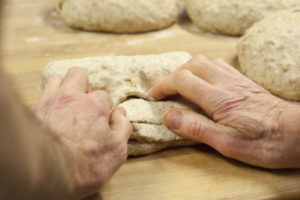 And now for the tight rolling. Thumbs have to be placed wide and flat as they exert pressure that ensures the rolling is tight and efficient. Next two pics are the view from each side 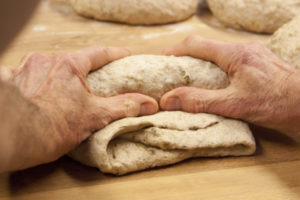 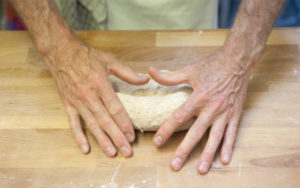 As the pressure of the flat thumbs is released you roll it up towards you just a little with the outspread fingers, then return to the flat/wide thumbs position to keep it tight. The action is jerky as you gently push with the fingers, release, then roll a little. Continue with a few of these jerky actions until it is entirely rolled up into a cylinder, as shown in next two pics. Third and final pic shows it being picked up, seam down, to be placed in the tin. 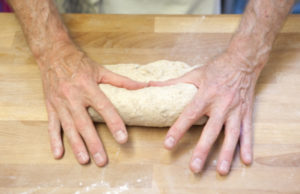 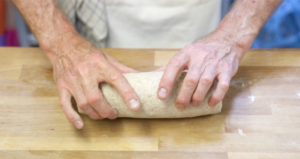