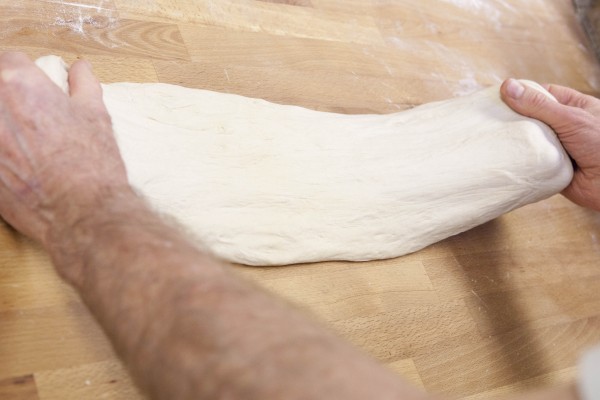 While salt is included in bread for purposes of improving or enhancing its taste, it imparts a complex and important influence on the fermentation process. Salt kills moist forms of yeast while they are actually on top of each other by drawing out its moisture (dried yeast is safe from attack because it has no moisture) . However, in dough salt simply gives yeast a hard time by causing it to have to spend energy regulating its water supply that is being taken by the hygroscopic salt (it draws water to itself). This dampening of yeast activity means that salt is known in fermentation as a “retardant”. It also explains why in leavens and sponges salt is rarely used seeing as in these pre-ferments the whole idea is to promote yeast activity and reproduction.

While steadying and retarding the process (in hot weather this is a bonus), another effect of salt is that it strengthens gluten by acting as an “astringent”, meaning that it improves the elasticity and strength of the gluten. When the salt has been accidentally left out, the baker would most likely become aware of this disaster because the dough will have fermented wildly and its volume is vast. In bakery quantities this could lead to a great chunk of dough falling out of a proving bin and plopping onto the floor.
If the problem had not been spotted while the dough was in bulk, it would be felt at the time the dough was cut up and handled. See the picture at the top where the weighed piece of dough is being stretched sideways by my hands in preparation for it being folded inwards then rolled up into a loaf shape suited to a large tin. It has resilience and tension borne of the nature of elastic gluten, but if it was a saltless loaf it would extend greatly meaning that the sideways tug of the hands would render it far too broad for the job in hand. Its extensibility would feel wrong. The presence of normal amounts of salt prevents the dough from being too slack and slumping when you make shapes like the cob.

Salt will also act as a mild preservative, inhibiting the activity of moulds.

In your kitchen, if you are a person who likes to minimise chemical additives, the salt for you is sea salt. Sea salt is pure, never containing the types of added chemicals that other salts have in order for them to flow freely and avoid going lumpy.

How much to use? For home bakers this is an entirely personal matter, depending on the family’s approach to use of salt. I always advise students that less than 1.5% of the flour weight will alarm many people who will think the bread tastes insipid. Salt used at over 2% will, on the other hand, lead to many people people remarking that the bread tastes salty. The professional baker is advised through trade bodies to toe the line as set by the Food Standards Authority (FSA), who release their edicts on many matters, and being a government body must take into account community issues such as heart disease. The current FSA edict on salt is to use it at 1.8% of flour weight, with the warning that during 2017 we can expect it to be put down to 1.6% – which is the level now recommended by the Real Bread Campaign. At the moment I use 1.8%, and during PANARY courses that is the amount we use.

These percentages are for making bread with conventional factory-made yeast. When we make sourdough, using less salt is normal practice, acknowledging that mature leaven has its tangy sour flavours.

It is interesting to note that 1.6% – 1.8% was the level of salt used by craftsmen bakers making British styles of bread right up to the 1950’s, the period during the previous century when the craft was at its peak. Then followed the disastrous period of industrial bread and “instant dough” which, being insipid and characterless through no time being allowed for fermentation, led to a rise in the amount of salt used in order to give the insipid stuff some flavour. Soon salt was used at 2% or higher. It was at 2% everywhere when I began baking during the ’70’s. It took concern over heart disease to bring it down to previous levels that the society once would have thought entirely normal, and what bread should taste like.