Plaits are so pretty, and they also lend themselves to a satisfying tearing off of chunks to dive into sauces and dips, as well as generally gathering up whatever is offered at table.

As soon as your hand skills have become capable enough to make the stick shape, tapered at each end, you can have a go at plaiting.
Be attentive that the separate stick strands have all been weighed at the same weight, and that they have been rolled to consistent girth width and overall shape regarding thicker middles and tapering ends.
Spend a little time making sure the sticks are all of the same length and then lay them down running out in front of you, not sideways on. As you finish preparing them, allow them to be briefly rolled in table dust (flour) so that they will not stick to the bench or each other.

It is an unfortunate feature of plaiting that the starting-off point is a little bulky and messy compared with the finishing point which is enhanced by the tension placed on the strands as you are finishing.
An exception to this problem is the 3-strand plait, for which bakers have invented a cunning way to effectively have two neat finished ends. Being only three strands, it is known by everybody and is a very sensible place to start.

3-strand plait
Lay the strands in front of you and rather than starting work at the top, instead you start plaiting from about the middle, completing the half nearest you. The rhythm of 3-strand plaiting is the simple mantra “outside to inside”, then again from the other side – outside to inside. At the finish as the strands feel tighter and more pinched, simply weld them together.
Now you pick it up in the middle where you began plaiting and somersault it over in your face so that the three strands that remained unplaited at the top are now facing you. Pay attention to lead off with the outside strand that should rightly be brought to the middle.
See the pic below. It shows the point at which the plait has been flipped over, and clearly the strand on the right-hand side is the one to be brought to the middle to begin the finishing sequence. 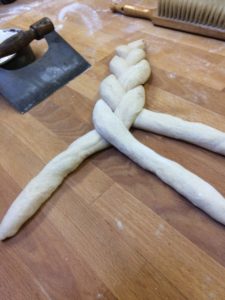 4 – strand plait
Follow the same guidelines given above and lay out the four even strands in front of you. Begin at the top, but before you begin the first move, allow the top pointy ends to be gently fastened together. This is the plaiting sequence:
2 over 3; 4 over 2; and 1 over 3
To interpret this properly you must remember that the numbering system from left to right resumes the 1 to 4 after each move. Hence, after doing the 2 over 3 move, the strand that was formerly 2 now becomes the new 3.
See the pic below, where you can see the gentle fastening of all four strands at the top, and the first move – the 2 over 3, revealing how important it is to appreciate that former number 2 is now number 3.

In my book the 4-strand is possibly the prettiest – I love it the way one strand bobs along the top. See pic below, where a 4-strander is proving en couche. 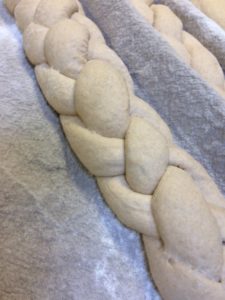