Function of oxygen in dough 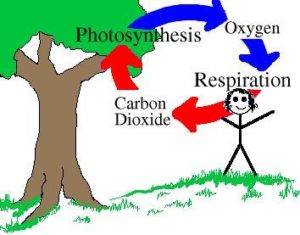 There is a misconception that yeast needs oxygen to work well producing gas  to raise the dough. Actually it does not need oxygen present, since yeast is capable of feeding on sugars either aerobically (with oxygen) or non-aerobically (absence of oxygen). It is true that the yeast likes to feed for the early stages when there is oxygen present, when it adopts a feeding position called respiration. The oxygen is plentiful at the start of bulk fermentation because the process of kneading will incorporate oxygen in the dough by the thrusting of folding motion. However, within the first hour the respiring yeast will use up that oxygen, and then it adopts the fermentation feeding position, when its enzymes change the starch sugars to glucose, and as it feeds on the glucose it makes more gas and alcohol than it was when it was respiring at the early stage. Actually, yeast is remarkable for its ability to feed in an environment both with and without oxygen. During the early stage of dough life the yeast is keen to gather and store the oxygen since oxygen is essential for it to maintain health and have the ability to both grow and reproduce. That is why in a yeast factory where the object is to make tons of yeast, oxygen is bubbled into the huge fermentation tanks. But in dough, on the other hand, the object is to generate gas for puffing the dough, and fermentation without oxygen will see to that.

Bakers should be warned that long kneading involving the incorporation of much oxygen leads to bleaching of the flour. Craft bakers are not obsessed with whiteness like the industrial bakers have been, and craft bakers need to know that the bleaching effect of the oxygen is damaging the carotene pigment in the flour ( from which it gets its creaminess). Lodged in the carotene is not just colour but also compounds that create some of the attractive flavours of baked wheat, hence it is a real depletion of the bread to destroy the carotene. Further, more oxygen is incorporated into dough at higher temperatures, so this is clearly a call to dough makers to avoid making warm dough. Cooler doughs will not only retain more carotene, but they also have far better structure and gluten.

Another area where the of the presence of oxygen has a  significant effect is the making of gluten. Free and available oxygen is drawn into the emerging gluten matrix as a necessary component, and there must be sufficient quantities of it to make high quality gluten. Although the yeast depletes the oxygen in the early stage of fermentation, the baker’s method of “folding” the dough will continue to incorporate oxygen for the gluten making.

Discussing the oxygenation of dough is not to create confusion with the oxidation of flour, which refers to the satisfactory aging of flour. During the aging of flour the proteins are oxidised and that has the effect of creating better gluten strands, giving better volume to the bread and less stickiness when working the mature dough on the bench. Craft bakers used to ensure that they had proper storage facilities to be able to age the white flour for several months of oxidation since the miller was unable to store it for long. (In times past businesses were happier to keep capital tied up in stock than they are today).

The aging of flour poses a dilemma for bakers who prefer to work with stonegrounf flour – those bakers seeking to offer the more nutritious product, since stoneground flour retains vitamins and minerals from the both the germ oil and the aleurone layer. As the oxidising of the protein occurs during aging, so too will the vitamins be  oxidising, leading to their goodness being leached away. I work often with stoneground flour at Cann Mills, and my compromise is to age it for only 3 – 4 weeks.

Sorry, but BUY OUR BREAD is closed. Our next bake is on Thursday 14th July 2022. Please, pop-back anytime from Friday 8th place your next order. Thank you. Paul. Dismiss