This Baker’s Topic is in two parts really. The first part given here is about making a cob, or round shape. Professional bakers teach themselves to have one piece in each hand so that the time taken to complete the task at least produces two, not just one. In this pic the action has just started and soon the hands will pump the dough around, each revolving in a different direction. 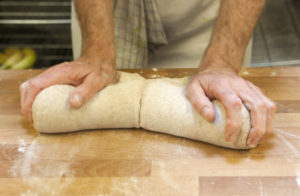 Rolling dough pieces into a loose ball to set them aside to rest (“intermediate proof”) requires a less thorough approach when compared with the tightness of the rolling that is required by a finished cob loaf.
The instruction given now is a series of hand movements that amount to a slow and meticulous deconstruction of the terse and rapid action of the two-handed pro. PANARY students attending a conventional yeast course where the cob is on the programme will be familiar with it, and will have learnt the chant of the repeated “12 to 6, quarter-turn”. Making a tight cob belongs to the world of conventional yeast baking, where gluten is strong and shapes are finished tight. Not so suited to the world of sourdough baking when expulsion of gas is less desirable.

Returning to working on one piece, learning the actions of “12 to 6, quarter-turn”, the cycle begins by taking the resting piece, turning it over so that the rough parts are facing upwards, then pat out the gas as shown in the next pic: 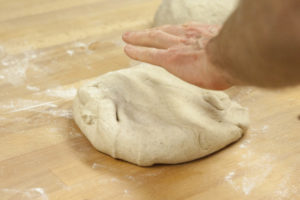 After removing the gas, you grip it at 12 o’clock and bring it over towards you to place it at 6: 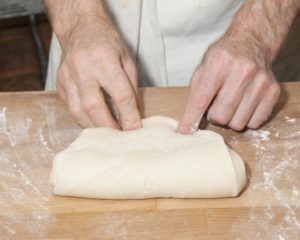 Push it down firmly to seal it, then proceed to the quarter-turn: 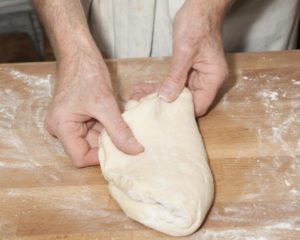 Back to the new 12 o’clock, and repeat the two main actions several times, and by the time you have performed four or five of the 12 to 6 and quarter-turn rotations (always rotate in the same direction), you will achieve a surprisingly round piece. The final 12 to 6 brings it to this: 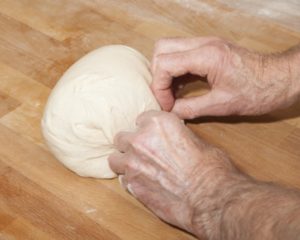 Hey presto you have achieved a neat cob!
Next newsletter – the action of rubbing the cob up the table so that it is superbly tight.
Good baking! Paul