In the vast range of individual British breads there is a round bun called the Devonshire split.  Its name alone suggests it was a bun more popular in past times, because today we tend to say Devon, not Devonshire. 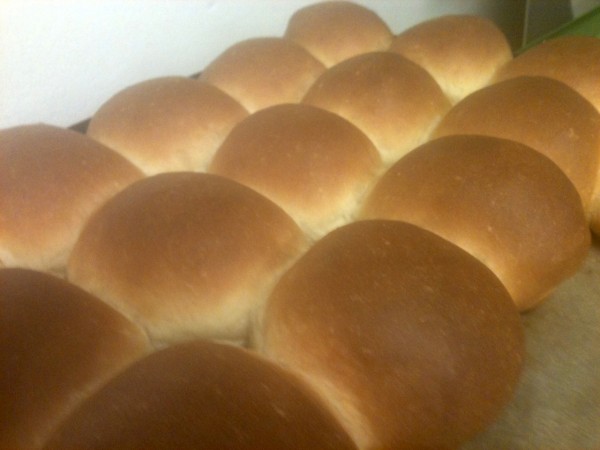 As buns and rolls go, they are smallish, with a weight of only 50-60 gm, and with a diameter of about 80 mm.  Their texture is that of very light, white bread, with a crust colour more golden brown than mahogany brown. One hundred years ago the alternative name of Chudleighs was popular, but whether there is any real connection with that small market town in Devon is unknown.

In the bread world the term “split” can refer to a loaf or roll that has been encouraged to tear open by a single knife slash running down the middle of its back before it is placed in the oven.  In Melbourne, Australia, I can remember a very popular crusty white loaf called the “split Vienna”. (Here Vienna referred to its shape not the style of bread). But with the Devonshire split the “split” describes the practice of cutting or tearing the roll through the horizontal plane, yielding a bottom half and a top half as it is split in two – just like scones.

It is never savoury, being a rich and light bun, slightly sweet, and when drawn from the oven the baker would be likely to dust it with fine sugar.  It is headed for the morning or afternoon tea table, where it would be served with jam and cream, clotted cream being another speciality of Devon. Today the clotted cream and jam ritual is greatly promoted by tourism, and the “cream tea” is associated more with the popular baking powder leavened  scone rather than a yeasted bun. 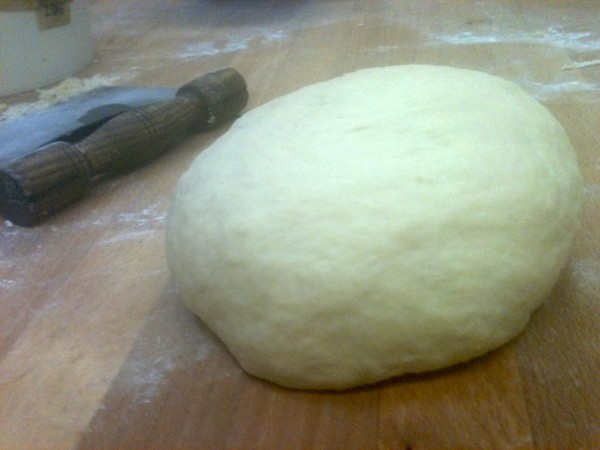 Considering the confusion of regional terminology, most buns, baps and rolls we encounter today are both savoury and crusty. However, that would be inappropriate for a bun that is to be eaten with jam and cream at a tea break, when what is desirable is a softness of both crust and crumb inside, and a small amount of sugar in the dough giving a hint of sweetness. Any craftsman baker would normally achieve this soft crust and crumb by using whole milk as the dough liquor, and by adding an egg or two and a generous amount of fat  to the dough. (My standard bun dough has butter added at 12% of the flour weight).

Old recipes for Devonshire splits encourage the use of cream in the dough, with the cream replacing the milk. Cream will certainly ensure an overall richness and softness, but a modern artisan baker would need to feel confident about being able to ask a high price for each roll before using cream. Considerably more watchful of costs, today’s factory baker will settle for milk powder and margarine, and probably a little more sugar, in the dough. 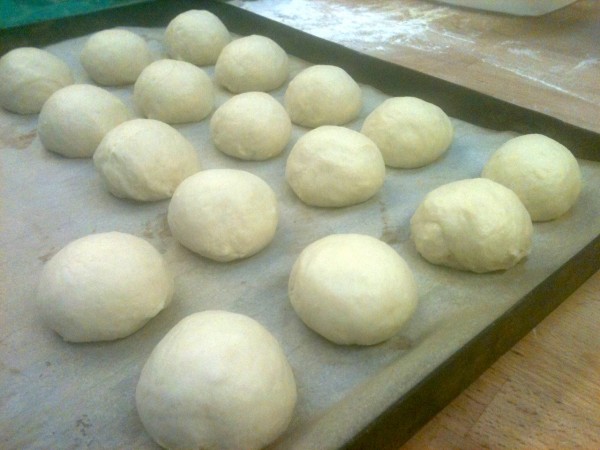 At the household baking level further softening of the crust can be achieved by wrapping the buns in cloth, perhaps a couple of tea-towels, as soon as they are out of the oven. Although this practice is known by artisan bakers to be effective, most commercial bakers would consider that it amounted to too much fuss. Unless they are handled gently and carefully, the buns will be crushed.

Type of flour to use

It is always exciting deciding what flour to use. Some craftsmen bakers would only have one type of strong white flour, suited to making all their white rolls, buns, and breads. On the other hand, some bakers have a range of different flours, making the choice to suit the particular attributes of the product.  For these Devonshire splits, light and white and soft, I would avoid a very strong flour, aware that they may turn out a little leathery with all that strong gluten. Instead, I would select a patent flour. Patent flours are extracted by the miller from the very heart of the grain where the finest and whitest starch lies – positioned there to feed the germ when it is ready to become the sprout.

They are captured by a sieve mesh that is finer than that for normal white flour, making them cost a little more. There is a small amount of gluten mixed with the starch in the grain centre, and it is of particularly fine quality despite its meagre amount. Hence patent flours are remarkable fine and light, as well as containing gluten that performs very well.

Make these little buns from Devon with all the care that you would lavish on a bun dough. Milk, cream, butter, perhaps with a ferment if that is the way you make your bun dough. Egg yolk, cream, butter – these ingredients will give the bun’s crumb a soft yellowish tint.  They will also lead to a dough that is certainly shorter than a strong flour bread dough. (You can see the bumpy look of the finished dough in photos 2 & 3). Have the icing sugar, or finely crushed sugar) ready for dusting them when they come from the medium-hot oven. 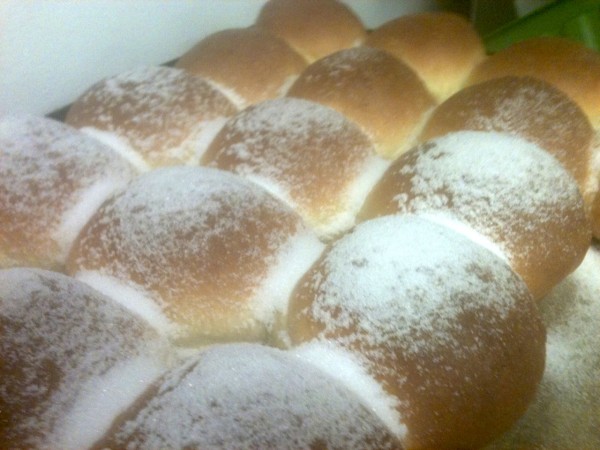