In my years as a baker, and more particularly as a sourdough man, I have found that there is a great significance to 20 degree temperature thresehold when regarding the ambient temperature of your bakery or kitchen. Below 20 C there is a steady development of sponges and leavens and you can plan how much yeast to use for the given number of hours that you want sponges and leavens to sit maturing.

In winter, of course, it is a constant battle to keep ambient temperatures up, and my teaching bakery is always hanging around a cool 14 C until it is a full-on baking day when I can bump it up to 18 C. In the depths of winter the flour comes over from the mill at below 10 C, and the ground water is coming out of the tap at only 7 C. It is easy to make the dough too cold in those conditions. Away from winter it is more pleasant as temperatures rise, and with ambient and flour temperature in the 16-18 region work in the bakery fits comfortably to plans and schedules.

However, come summer, and see the overnight ambient at 21 C and you know things are suddenly to go haywire. The groundwater is coming in at 17, and the flour on the stand (or your pantry) will also be 21 degrees. The thermometer shows that the finished dough temperature is 21-22C, which shows that the friction of the big arms of the mixing machine diving through the dough has added a couple of degrees, hence the coolness of the water is nullified. Now you can see why in summer, when professional bakery temp sits on 25 deg or more, bakers must use refrigerated water.

I am happy enough with 22 degrees for large doughs, that is what we look for with the amount of yeast planned. But I could only succeed to get it by running the dough water straight from the cold tap.

However, it is more tricky to control the white sponge and the sourdough wheat leaven sitting out at 21 degrees for 11 – 12 hours overnight. The sponge was so developed that a big whiff of alcohol rose when its lid was taken off. This picture shows its open texture, and you can see that it has started to deteriorate. At overnight 21 degrees it was probably ready at a mere 7 or 8 hours, not the 11 to 12. Yet its yeast was only 0.3 of 1%. It should have been 0.1%, which would only cover your thumbnail.

Now to look at the sourdough leavens. This wheat one has behaved alright. Such openness and array of decent bubbles it is telling us that it is perfectly ready, but not over-wrought or damaged.

To sit maturing for the 11 hours overnight, the wheaten leaven was seeded with a blob of common leaven that was less than 1 % of its bulk. (80 grams for a 10 kg Production leaven). When I arrived at 6:00 am and looked at it I would have preferred that it needed another hour to continue maturing because then I would have time to make a large autolyse dough to sit for an hour. But when it is developed and ripe like this photo shows, no time to be doing other jobs first.

Next week, if bakery temp is again 21-odd, it will be inoculated with a mere 0.6% of leaven. ( When the ambient temperature is a calm 17-18 degrees, the amount of seeding yeast for its overnight 11 hours is more like 2.5%).

And now to look at the rye Production leaven, after 3 days at 21C. Lately, it has to spend so long before use because we have to overcome the current problems of over-abundant enzymes from last summer’s difficult harvest conditions here in the south of England. It must be grossly acidic to counter the over-abundant amylase enzymes that will produce too much dextrin in the pure rye loaf as it bakes, causing it to have a soggy, sugary middle, and usually a horrible hole too. Often, after three days at 21 degrees, the rye leaven will have grown mould on its surface carpet. For this photo I have gently scraped the carpet aside and you can see the wet leaven shining in the middle.

In other years during hot spells I have noticed that the mould arrives when ambient temperatures are steadily over 20, so for the rest of this hot summer I shall hold my breath and hope that I remain lucky about the mould issue.

Autolyse (preferred by British bakers) or autolysis (the more widely used scientific term that refers to the self-digestion of a cell by its own enzymes) was a discovery by Professor Raymond Calvel in the early ’70’s. He was the great French baker who, seeing how badly French bread needed rescuing from mediocrity, went off to study sciences and ended up as an academic bread consultant and author. His most famous book, The Taste of Bread, is like a manual for bakers, and was translated into English by James MacGuire, who is a chef and baker in Montreal, Canada. Sadly, Prof. Calvel did not include autolyse as a topic in his book, but MacGuire added a short summary of it as an adjunct to the chapter on dough mixing.

Milling with stones, which was, until 150 years ago, the only way flour was made, is today a tiny niche in the vast field of flour milling which is dominated by the modern roller mill.

Although an anachronistic niche, its place in the xenical online https://xenicaltop.com/ market is assured because enough people are aware that what is special about stoneground flour is that it is truly nutritious. The same could not be said about roller-milled flour which is emaciated, being devoid of the grain’s minerals and vitamins when compared with the stonegound product.

Recently we had a photographer at PANARY. His name was Tommy Weinz, and he is creating a German bakery magazine for craft bakers. He is keen to nurture the craft revival there, and explained that to date

Germany has not had a zealous body like our Real Bread Campaign. As a young man he trained to be a baker in Germany, undertaking their long apprenticeship system. As he scuttled around snapping lots of photos of work performed by me and apprentice Martin on a typical Thursday commercial baking day, I noticed how he liked to dwell on some of my crafty and traditional equipment, such as the balance scales here.

To read about the courses, see daily programmes, and make bookings, visit Calendar. 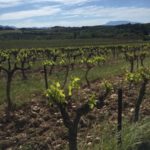 Vines in the springtime, looking across vineyards to Mont Ventoux on the horizon.

Six days in a vineyard on the Rhone valley north of Avignon. Four days baking, two days fun including excursions. Baking done in both a courtyard wood-fired oven and domestic electric ovens in the gîtes. Accommodation is splendid, and the local area unforgettable, with vines, olives and lavender, and beautiful hilltop villages. Book Panary in Provence today!

In my years as a baker, and more particularly as a sourdough man, I have found that there is a great significance to 20◦ C [read more]